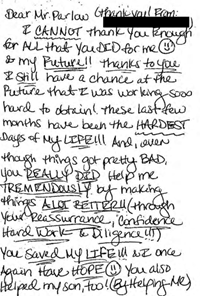 The law firm of Parlow & Lang, LLC has successfully represented well over 10,000 clients in various criminal cases in Pennsylvania and New Jersey. Michael Parlow and Paul Lang concentrate exclusively on Criminal Defense matters and are dedicated to using every resource and strategy developed over 19 years to successfully defend you.

Michael Parlow has defended individuals charged with possession and/or distribution of drugs, driving under the influence of alcohol or drugs, murder, rape, kidnapping, aggravated assault, homicide by vehicle, robbery, theft, auto theft, home invasions and a litany of other offenses. He has represented individuals in both trials before Judges and Juries. He is an experienced litigator, having argued cases in the Court of Common Pleas, Superior Court and Supreme Court of Pennsylvania.

He has successfully defended your constitutional rights by suppressing evidence which prevented the district attorney from using physical evidence collected from the arrest against an individual. Examples of evidence excluded from cases, which handicapped the prosecutor's ability to prosecute, were alcohol results in DUI cases, a kilo of cocaine in a drug distribution case and physical evidence in a kidnapping case just to name a few.

Mr. Parlow was aware of my legal issue before I did. He sent me a letter stating such info & I immediately called to schedule an appointment. I was impressed with his professionalism & strategy to handle my case, I hired him on the spot. He had my case dismissed with a small fine. I couldn't be happier with the outcome & I would recommend him to anyone who needs a criminal attorney.

I'm a first time DUI offender. Mr. Parlow was outstanding. He was very caring during my time of need. Not only did he get me into ARD, but he also was able to get my BAC reduced from .159 to .099 to avoid a 30 day suspension of my license. This was very critical for me. I am able to get my wife to her appointments without uber or lyft. Also I'm able to continue my duties where i am employed. Excellent job Michael!

Teenage Son Got into Some Trouble

This past fall, my son got into some trouble with the police while "hanging out" with a group of his peers. I called Paul on a weekend and he replied with a phone call immediately on a Saturday morning. Paul warned me that my son could be facing a felony charge! Paul brought us in and spent a lot of time interviewing me and my son - at no cost. Paul is a serious and honest attorney who really seems to thrive in situations where he can use his expertise in Bucks county to help young people realize the best outcome possible.